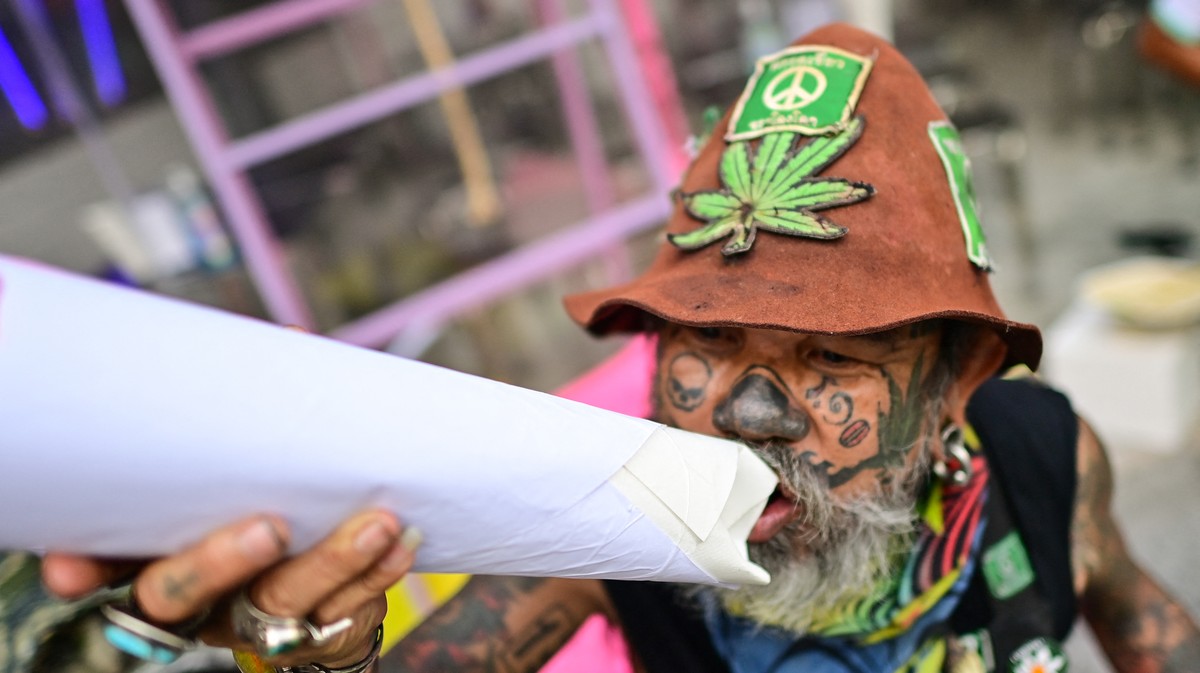 Koh Ewe · May 12, 2022
The entrepreneur runs Bloom, a shop he co-founded in October last year selling cannabis products in Thailand, ranging from CBD oils to edible jellies and skin serums. Businesses like Pat’s were unseen in Thailand until a little over a year ago, but could soon become commonplace if the count

The country has made global headlines for its apparently ultra progressive approach to cannabis. But the reality on the ground is far less simple.

If things pan out the way Pat Taechanarong expects them to, Bangkok may soon become what he envisions as the “Amsterdam of Asia.”

The entrepreneur runs Bloom, a shop he co-founded in October last year selling cannabis products in Thailand, ranging from CBD oils to edible jellies and skin serums. Businesses like Pat’s were unseen in Thailand until a little over a year ago, but could soon become commonplace if the country’s cannabis industry flourishes in the next few years as he anticipates.

“Today we are serving customers of all ages and all sorts of life,” he told VICE World News. “A lot of people are excited about these changing laws.”

The changing laws Pat’s referring to have been in the works since December 2018, when Thailand made global headlines by legalizing cannabis for medical use. Then, in February this year, it was announced that cannabis and hemp would be removed from the national narcotics list—making it the first country in Asia to de facto decriminalize the plant.

The latest development in Thailand's shifting approach to cannabis came this week, as Public Health Minister Anutin Charnvirakul announced in a Facebook post that his department planned to give away one million free cannabis plants to citizens after June 9, the day it will become legal for Thais to grow unlimited amounts of the crop at home.

But despite Thailand’s seemingly progressive approach to cannabis, on paper placing it among the most forward-thinking jurisdictions in the world when it comes to the drug, the reality is far more confusing for would-be consumers.

Next month’s cannabis plant free-for-all comes with heavy caveats, with growers only allowed to produce medical-grade cannabis for medicinal purposes. And while citizens will be able to grow unlimited amounts, they won’t be allowed to use what they produce as it remains illegal to consume more than trace amounts of cannabis recreationally. Cannabis extracts containing more than 0.2 percent THC—the psychoactive element—remain on the narcotics list.

“[Getting high] has never been [legal] and it’s not going to be, even with growing at home,” Kitty Chopaka, the CEO of cannabis-focused consulting firm Elevated Estate and a longtime advocate for its legalization in Thailand, told VICE World News. Just how officials plan to prevent people from smoking the copious amounts of cannabis they’ll legally be allowed to grow at home is unclear.

“All the news [about Thailand legalizing cannabis] goes out around the world and what actually happens is it causes locals to have curiosity and it creates a demand… When the demand is not filled by the legal market, where do you think they're going to go?”

These seemingly inconsistent regulations demonstrate an ongoing conflict between the Thai government’s desire to gain a foothold in a potentially lucrative cannabis market—one that the government hopes will generate over 10 billion baht ($290 million) a year—and its reluctance for a culture of cannabis consumption to flourish within its borders.

Kitty says that this regulatory ambiguity has opened up a gray area in which cannabis-related businesses tread a fine line, attempting to capitalize on the green rush while stopping short of actually selling weed.

“This is kind of how [Thailand’s] cannabis industry in a nutshell works. It's not always the plant-touching that is the money-making,” said Kitty, a reference to local companies operating within the cannabis industry that don't actually sell products containing cannabis. “So that's kind of where we play, within the legal space that we're allowed to play.”

Kitty is also the founder of Chopaka, a line of gummies containing terpene, a naturally occurring substance within various plants, including cannabis. According to Kitty, the terpene in Chopaka gummies can elicit various effects associated with cannabis consumption—such as getting the munchies or feeling sleepy—but without the high. And despite their cannabis-like qualities, these gummies don’t contain any THC or CBD content, which is why they are approved by Thailand’s Food and Drug Administration.

This need to operate creatively is something widely seen among Thailand’s budding cannabis entrepreneurs. In January 2021, the country’s first legal weed cafe was set up just outside of Bangkok, serving up items like “Good Mood Pizza” and “Giggle Bread.” But while these items, adorned with bright green leaves, play off cannabis motifs, they contain only trace amounts of THC. The cafe, cautious of not exceeding legal limits, omits the use of cannabis buds.

But even as the Thai government places firm boundaries around the use of cannabis within its borders, it has also poised itself to reap the economic benefits of liberalization.

For years, Anutin has been pedaling the legalization of cannabis as part of a wider campaign by his Bhumjaithai Party, members of a ruling conservative coalition led by former military chief and current prime minister Prayuth Chan-ocha. According to Kitty, free plants are just one of Anutin’s publicity-friendly political manoeuvres, as the government attempts reap the economic benefits of cannabis while minimizing the social effects associated with liberalized drug use.

Thailand’s cannabis industry has already proven to be highly lucrative, with Anutin announcing in March that the country had generated 7 billion baht since cannabis was legalized for medicinal purposes in early 2019. Recent months have also seen cannabis described by officials as Thailand’s “secret weapon” to revitalize its badly hit tourism industry as it looks to hasten the return of visitors through a pot-friendly image.

But while Thai authorities seem keen to frame cannabis purely as a cash crop, the tension between encouraging the widespread cultivation of cannabis while criminalizing recreational use is, as some see it, bound to come to a head.

“All the news [about Thailand legalizing cannabis] goes out around the world and what actually happens is it causes locals to have curiosity and it creates a demand,” Kitty said. “When the demand is not filled by the legal market, where do you think they're going to go?”

But despite the lack of a clear roadmap, the government’s fervent promotion of cannabis’ economic potential appears to have already influenced attitudes, opening up conversations it may wish it hadn’t. Today, Kitty says, Thai people are broaching the previously taboo topic, paving the way for wider discussion about cannabis use and changing mainstream perceptions of the drug.

“They are not as afraid of it. They're not afraid to talk about it anymore,” said Kitty. “There's more of a curiosity and people seem to associate it more with making money than anything else.”