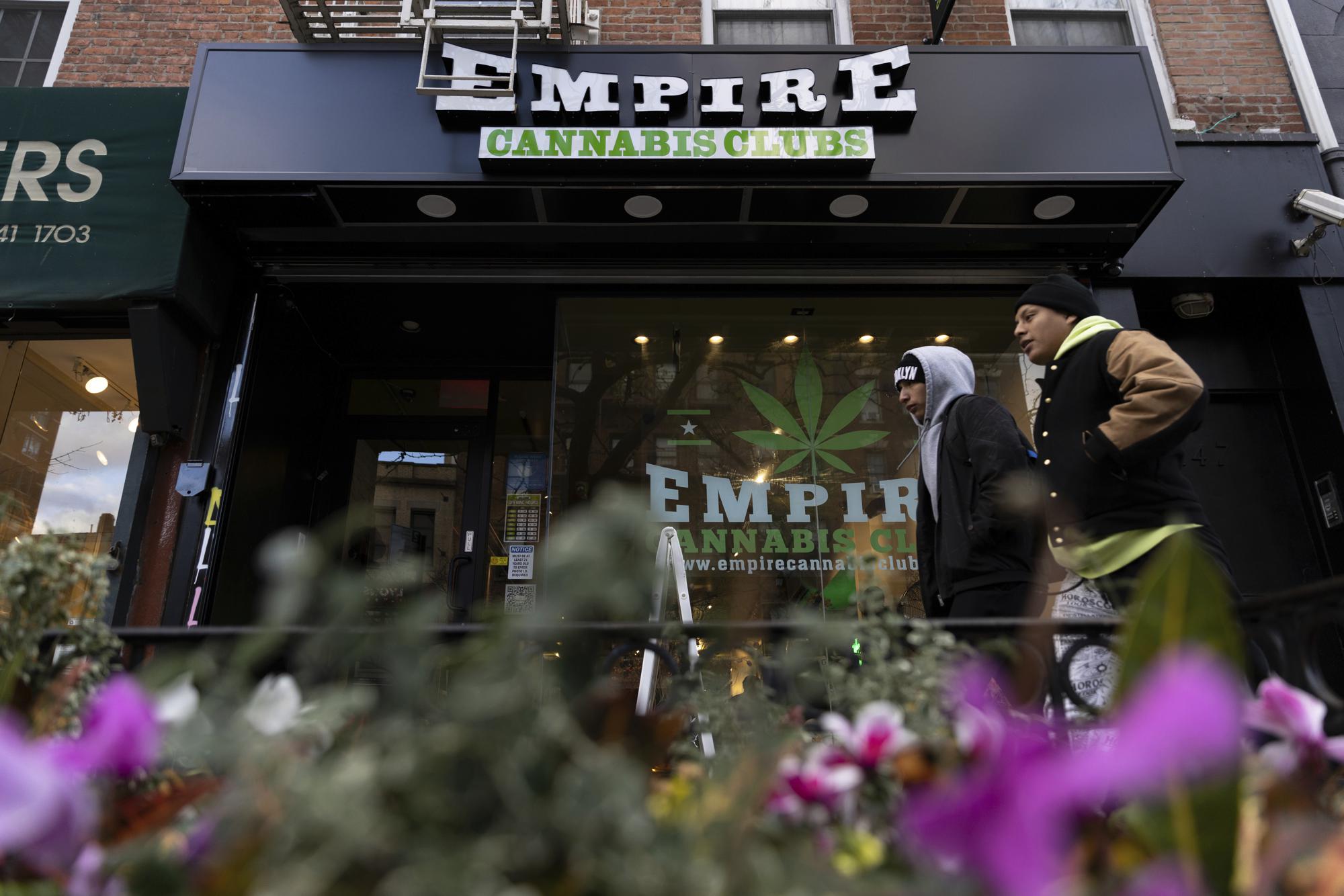 New York hasn't licensed any pot shops, yet they abound

Jennifer Peltz · Nov 18, 2022
He wrangled a lengthy application to become one of about 900 hopefuls for a first round of 150 licenses, only to face new uncertainty from a court ruling last week. It temporarily blocks the state from greenlighting dispensaries in Krupitsky’s home turf of Brooklyn and some other regions.

NEW YORK (AP) — Eager, anxious and frustrated, Yuri Krupitsky is waiting to find out whether he'll get to open one of the first legal recreational marijuana shops in New York state.

He wrangled a lengthy application to become one of about 900 hopefuls for a first round of 150 licenses, only to face new uncertainty from a court ruling last week. It temporarily blocks the state from greenlighting dispensaries in Krupitsky’s home turf of Brooklyn and some other regions.

Meanwhile, unauthorized pot shops have cropped up in droves.

Stores openly selling marijuana can now be found throughout New York City, operated by people who shrugged at licensing requirements.

“It’s unfair competition,” Kuritsky said. “Everyone’s just saying, ‘Sit around and wait,’ and in the meantime, I see shop after shop, and they’re making their money. I’m sitting around waiting to do it the right way."

Under pressure to launch one of the nation’s most hotly anticipated legal marijuana markets, the state Cannabis Control Board on Monday is to consider awarding some dispensary licenses to entrepreneurs and nonprofit groups — a major step that comes as cannabis regulators stress that they're trying to stop unlicensed sellers.

“There cannot be a legal, regulated market operating side-by-side with an illegal market — it undercuts the goals of the state’s Cannabis Law to protect public health and build an equitable market that works to undo the harms caused by the disproportionate enforcement of cannabis prohibition," Office of Cannabis Management spokesperson Aaron Ghitelman said in a statement.

New York legalized recreational use of marijuana in March 2021 but is still in the process of licensing people to sell it.

It reserved its first round of retail licenses for applicants with marijuana convictions or their relatives, plus some nonprofit groups. It also planned a $200 million public-private fund to aid “social equity” applicants.

Officials even set out to find, design and renovate storefronts for the for-profit entrepreneurs, who have to sublet a state-designated space and repay the refurbishing costs.

Ten teams of design and construction firms have been chosen, and the state is talking to landlords about dozens of locations. About 20 are undergoing preliminary design assessments, said Jeffrey Gordon, a spokesperson for the state's construction arm, known as DASNY. To pay for it all, the state has seeded the equity fund and is working to raise private money, he said.

Gordon said the agency aims to have several dispensaries ready by the end of the year but encountered “unexpected delays,” including the court case, which challenges parts of the state's criteria for applicants.

“However, many of the elements are in place and ready to move forward,” he said.

While those efforts play out, some pot entrepreneurs have simply rented storefronts and opened up without permission.

Empire Cannabis Club already has a location in Brooklyn, two in Manhattan and plans for more. Proprietor Jonathan Elfand says the year-old club sells marijuana products at cost to thousands of members who pay daily or monthly fees.

He argues the operation is legal. The state disagrees, but Elfand is undeterred and says he’d welcome a court fight.

“If you think there is something we’re doing wrong, please bring the battle. We’re ready,” said Elfand, who also applied for a dispensary license.

The cannabis office has told Empire and dozens of other enterprises to stop selling pot, and the agency is working with local law enforcement officials to clamp down. Separately, the State Liquor Authority suspended a Long Island deli's liquor license Thursday, claiming the shop sold marijuana.

Enforcement can entail violation notices, or arrests. Searches at a suburban Buffalo store in February and a Brooklyn shop Wednesday led to felony pot possession charges.

His office and the New York Police Department also have cited parking and vending laws to tow trucks suspected of selling weed.

Craig Sweat and his partners ran a fleet of “Uncle Budd” trucks that were impounded in September. He says they weren’t selling marijuana, but rather giving it to people who made donations. Despite the seizure, he doubts authorities have the appetite for a sweeping takedown of illegal shops; that would amount to “criminalizing marijuana again,” he says.

The state Senate in June passed a proposal to increase fines for illicit sales and make unlicensed selling a misdemeanor. The measure stalled in the Assembly, but sponsor Sen. Liz Krueger, a Democrat, says she’s “optimistic” about tackling the issue next year.

Among dispensary applicants hoping for approval Monday is Jessica Naissant, who figures she’s an ideal candidate. A first-generation Haitian American, she until recently had a shop that sold the non-intoxicating, federally legal cannabis chemical CBD. She volunteers speaking to church groups and others about marijuana legalization. And she has a qualifying arrest record — a 2016 pot possession charge, she said.

“There was no way I was letting this chance pass me by,” Naissant said.

But now she’s concerned about how last week’s court ruling will affect her prospects, since she listed her native Brooklyn as her first-choice location.

“It’s bittersweet, for sure,” she said.

“They don’t really have a lot of options but to wait and hope that they don’t end up having to suffer any losses," said Dan Livingston of the Cannabis Association of New York, a trade group.

Whatever the wrinkles, New York's approach to legalization has gotten some kudos for innovating and emphasizing equity, and applicant advocate and cannabis lawyer Scheril Murray Powell counsels patience. As chief operating officer of the Justus Foundation, she works to help longtime sellers go legal.

“They’ve waited decades for this moment to happen, and I think everyone’s committed to making sure it happens correctly,” she said. “Another couple of months isn’t so long to get it right.”

For more AP coverage of the recreational marijuana issue: https://apnews.com/hub/recreational-marijuana