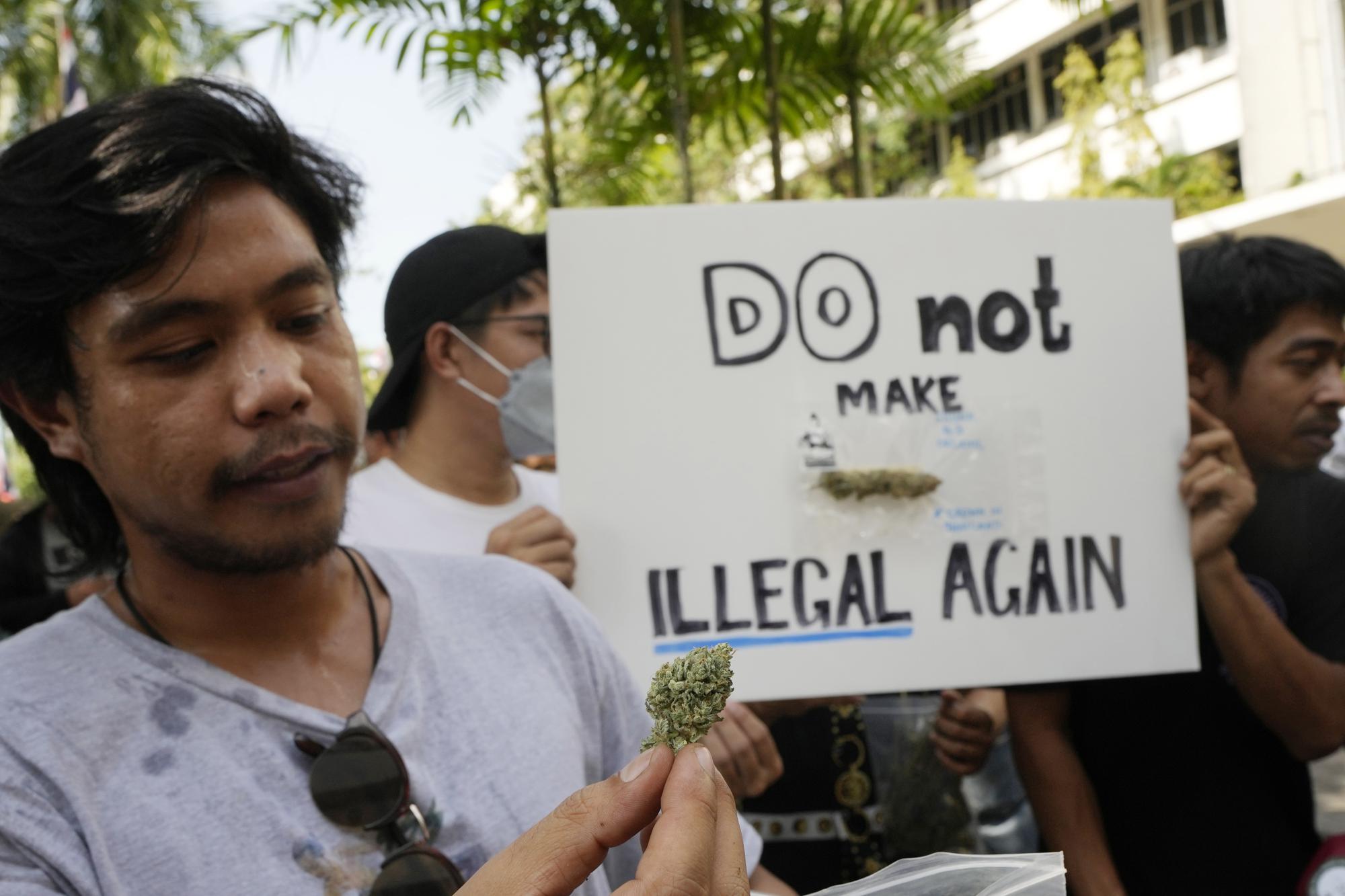 Chalida Ekvitthayavechnukul · Nov 22, 2022
Marijuana for medicinal purposes was made legal in June, but the absence of a special law specifying the conditions for its cultivation and sale allowed the growth of a recreational marijuana industry. The demonstrators don’t want rules that would restore tight restrictions on the drug.

BANGKOK (AP) — Wearing T-shirts emblazoned with marijuana motifs and handling out samples, around 200 backers of Thailand’s liberalized marijuana regulations rallied Tuesday at Government House in Bangkok to protest the possible rollback of the drug's recent decriminalization.

Marijuana for medicinal purposes was made legal in June, but the absence of a special law specifying the conditions for its cultivation and sale allowed the growth of a recreational marijuana industry. The demonstrators don’t want rules that would restore tight restrictions on the drug.

Sale and use of marijuana, generally called cannabis in Thailand, were effectively decriminalized when the Public Health Ministry dropped it from its list of what it deems “narcotic” drugs.

The move was a key policy of Public Health Minister Anutin Charnvikul, who foresaw huge economic potential in the medical marijuana market. It could particularly benefit farmers, who make up a major part of the constituency of Anutin's Bhumjai Thai Party. But no special regulatory legislation has been passed so far.

Cannabis shops have sprung up in many Bangkok neighborhoods along with mobile dispensaries and street stalls, even though police warned that consumption would only be allowed in private, and sales would not be allowed to youths or near schools.

The open sales have upset many conservatives, leading to a call for marijuana — or at least the psychoactive parts of the plant used to get high — to be put back on the narcotics list.

Tuesday’s rally brought together cannabis farmers and shop owners who stand to lose out financially, as well as smokers who want to enjoy marijuana without harassment. They gathered near Government House because the national Narcotics Control Board was meeting there to consider the situation.

“We want to ensure that these politicians are not trying to put cannabis on the narcotics list again. If that happens, our fight for years will mean nothing,” Akradej Chakjinda, a coordinator of Cannakin, a network of cannabis decriminalization supporters, told The Associated Press.

A proposed Cannabis Act to implement Anutin's decriminalization policy is to be introduced in Parliament on Wednesday, but it may take several weeks to come to a vote. It is possible it will not pass because opposition parties joined by the Democrat Party, a member of the governing coalition, argue that cannabis should be strictly controlled as a narcotic drug until a law with adequate regulations is in place.

Earlier this month, in a move to ease the pressure to roll back deregulation, the Public Health Ministry announced a new ministerial rule to more strictly control the promotion and sale of marijuana buds. However, it has not yet come into effect.

Separately, the Administrative Court on Monday accepted a lawsuit filed by a doctor and opposition lawmakers seeking an order to nullify the ministry's decriminalization of marijuana. Anutin and the Narcotics Control Board are co-defendants.

Nutthawut Buaprathum, a co-plaintiff, said it is better to put marijuana back on the narcotics list until the proper laws are in place. He is a member of the opposition Move Forward Party, which initially supported decriminalization.

“We know that marijuana has a lot of benefits, so we gave full support to decriminalize it. But we did not expect that the Cannabis Act would take this long and that this would cause a lot of negative impacts on society because of no proper laws and regulations,” Nutthawut said.