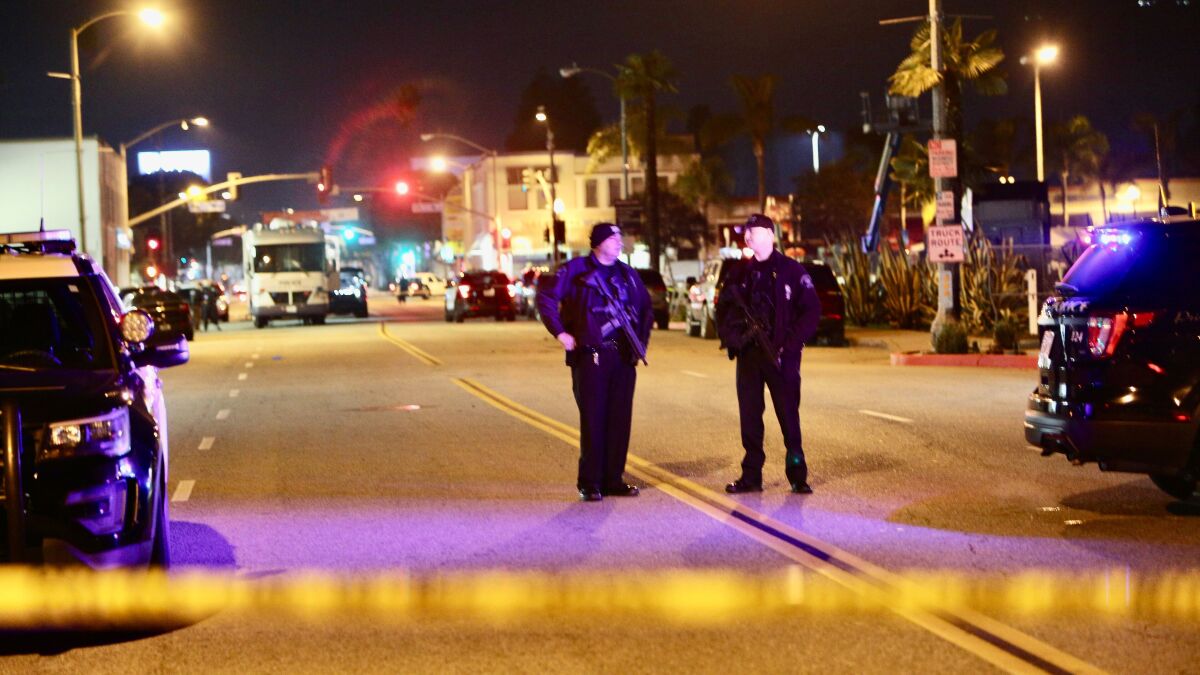 United in their love of ballroom dancing and now in death: The victims of the Monterey Park shooting

Summer Lin · Jan 23, 2023
Among the 11 victims killed in the weekend massacre at the Star Ballroom Dance Studio in Monterey Park — including one person who later died in the hospital — were a beloved aunt with a flair for fashion, a father of two who loved to sing and a manager whose effervescent energy filled the

They were united in life by a love of movement — of sashays and sways and spins on the dance floor — and again in death by the devastating reality that they took their final breaths in the place they had long considered a sanctuary.

Among the 11 victims killed in the weekend massacre at the Star Ballroom Dance Studio in Monterey Park — including one person who later died in the hospital — were a beloved aunt with a flair for fashion, a father of two who loved to sing and a manager whose effervescent energy filled the studio.

They were all in their 50s, 60s and 70s, according to the Los Angeles County coroner.

Family and friends identified two others as Ming Wei Ma, whose age was not immediately available, and Nancy Liu, 63.

Nine others were injured Saturday when a gunman opened fire inside the Monterey Park studio, where people had gathered for a dance party to count down the hours leading to the Lunar New Year.

The gunman, identified by police as Huu Can Tran, 72, then fled to a second dance hall in Alhambra, where a man working the front desk wrestled a semiautomatic pistol away from him.

The next day, Tran fatally shot himself as police approached his van in a Torrance parking lot, according to officials.

According to law enforcement sources, the investigation is focused on Tran’s interactions at the two dance studios and whether he was motivated to kill by jealousy over a relationship.

The shooting, in the heart of the region’s Chinese community, shocked Monterey Park’s sense of self and devastated the nation.

On Monday, a small memorial to the victims sprung up outside City Hall.

People left heart-shaped balloons, a pot of lavender, oranges and a bouquet of white roses with a note reading "With deepest sympathy.” On the edges of the note card, someone scrawled a message in pen: “STRICTER GUN LAWS.

WHY? LOVE.” For Fonda Quan, the devastation was deeply personal.

Her family got a call this weekend informing them that Nhan — her aunt, known to loved ones as Mymy — had been shot in the massacre.

Before long, the coroner called to confirm that Nhan was among the victims.

“It’s gut-wrenching,” said Quan, 32, who grew up sharing a home with her aunt, as well as her parents and grandmother.

“It’s been difficult to process.” For years, she said, her aunt spent weekends taking classes at the Star studio.

On Saturday, Nhan had decided to dart out early to go home and set up a family shrine to pay homage to ancestors for Lunar New Year.

But just as Nhan and her dance partner were backing their car out of the studio parking lot, the gunman approached from the driver’s side, according to an account relayed to Nhan's family by the partner.

The shooter pointed the gun at them and fired, striking Nhan several times, before sprinting into the ballroom.

Her partner, who was seated beside her in the car, was not hit, Quan said, and didn’t recognize the gunman.

Nhan, who grew up in Ho Chi Minh City and emigrated to Rosemead with her family in the 1980s, had an infectious cheerfulness and an eagerness to celebrate the wins of those in her wide circle of friends.

She loved ballroom dancing, Quan said, and all things fashion.

Along with a statement the family posted on Twitter was a picture of Nhan smiling proudly in a teal dress and a pair of wispy earrings, her hair curled and styled in a half ponytail.

“Unfairly, Saturday was her last dance,” the statement read.

“We are starting the Lunar New Year broken.” One of Nhan’s longtime instructors, Maksym Kapitanchuk, said her presence breathed life into both the Star Ballroom Dance Studio and Lai Lai Ballroom and Studio in Alhambra, where the shooter went after gunning down the Monterey Park victims.

Kapitanchuk met Nhan at Lai Lai in 2010, soon after he moved to the U.S.

Nhan was his very first student, he said, and her passion was undeniable.

"Dance was her life," he said, adding that she attended classes every night of the week.

Before long, she was bringing five or 10 — sometimes even 20 — new people to his classes.

And she was always there herself.

“I really don’t know how I’m going to handle it right now,” he said, “teaching without her.” Elena Krifuks, an instructor at Lai Lai, said that during social dances like the event on Saturday, Nhan always sat at the same table, just to the left of the stereo system.

Tucked there, she sipped tea during breaks before jumping back onto the floor to samba or tango.

Krifuks said she relied on Nhan to get the word out about showcases and other events.

“She had everyone’s phone numbers,” Krifuks said, “and she was friends with everyone.” Both instructors were featured in a 2019 Oscar-nominated documentary short, "Walk Run Cha-Cha," which highlighted the Lai Lai studio.

Among the large cast of students were many people who had initially been brought there by Nhan.

Another victim, Alvero, shared that love of ballroom dance and for years had dropped in at events at Star, according to a relative who declined to be identified.

The relative, who learned of the shooting from TV Sunday morning, said Alvero was married and had two children in their 30s.

“He was a cheerful guy,” the relative said.

“He wants to dance or sing.” At Star, Ma was a constant presence — a skilled social connector, friends said, who worked and danced at the studio.

In the moments before the gunman opened fire Saturday, Ma, who helped manage the studio, had been acting as DJ, playing a song called “Light Rain in March," according to an eyewitness who asked to be identified only by her first name, Grace.

About a dozen people were on the dance floor when the barrage began, she said.

“Heartbreaking,” said Dariusz Michalski, an instructor at the studio.

“We are just speechless and cannot find the words to describe how we feel right now.” Another instructor, David DuVal, said that Ma — known affectionately as Mr.

Ma — had emigrated with his wife from China, where he had been part of a well-known dance group.

A third instructor, Lauren Woods, posted about Ma on Facebook, saying she had run into him at the studio in the hours before the shooting.

As she arrived that day to teach a private lesson, she spotted Ma, who eagerly offered to help her search for a parking spot along streets packed with people attending the Lunar New Year festival.

Later, she saw Ma chatting with dancers, offering them encouragement.

“I’m personally thankful to have that last beautiful interaction,” she wrote.

“He was the heart of Star Ballroom.” Ma didn’t speak much English, Woods said, but he never struggled to communicate his affection to her, often greeting her with excitement and a kiss on the cheek.

“My teacher! My teacher!” he would say, swooping her into a hug.

“Love you! Love you!” Lily Ko, who has taken a class at Star every Tuesday for two years, recalled sneaking glimpses of Ma teaching another class — he was really good, she remembers thinking.

Whenever he spotted her group dancing, Ko said, he made a point to encourage them.

“Very great,” he told them.

“Very excellent.” Her Tuesday classes ended around 10 p.m., and Ma often waited for her so she wouldn’t have to walk to the car alone.

"He made sure I was safe," she recalled.

On Twitter, Juno Blees said her mother — identified by the New York Times as Liu — died in the shooting.

She never made it out of the dance studio,” Blees wrote.

“My family is devastated.” For the communities at both dance halls, Saturday’s shooting decimated a sense of safety.

Alyce Harley said her mother, Marlene Xu, had been going to the studio for seven years but wasn't there Saturday.

It had become a sanctuary for Xu, an immigrant from China who found a renewed sense of belonging at the studio.

It was a place for the 67-year-old to celebrate holidays and catch up with friends — friends whom she is now mourning.

Two of the dead were Taiwanese American, said the Taipei Economic and Cultural Office in Los Angeles.

One was a Chinese citizen, Chinese consular officials said.

“She is really, really struggling,” Harley said of her mother.

“Folks like my mother and many other immigrants were able to partake in something very Western without it feeling very foreign to them.